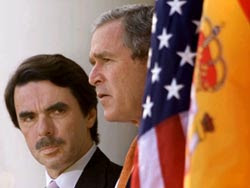 LIFE could hardly be better for Spain's former prime minister, José María Aznar: he travels the globe, sits on the board of Rupert Murdoch's News Corp, and lectures happily to Washington think-tanks. The same cannot be said of the conservative People's Party that he led until March 2004, just before it lost an election. Almost three years on, the PP has also lost its way.
Internal bickering fills the newspapers; senior figures jostle to succeed the present leader, Mariano Rajoy, if he stands down after the next election in early 2008.
Some still ask whodunnit National politics in Spain is a two-party affair. If the PP is to oust the Socialist prime minister, José Luis Rodríguez Zapatero, it needs voters in the centre. But it shows no sign of wooing them. Instead, it angrily opposes all governm

ent initiatives, from gay marriage to Catalan devolution, to peace talks with the Basque terrorist group, ETA.
Like Britain's Conservative Party in the past, it risks seeming to be a “nasty” party. A recent video attacking Mr Zapatero's record on crime, which included pictures of violence from the time when the PP was in power, has not helped.Yet at the root of the PP's troubles is its inability to shake off the trauma of its loss of power. This came three days after Muslim terrorists killed 191 people on Madrid trains. The day before the vote, angry protesters came out on the streets demanding to know who was to blame. Was it ETA, as Mr Aznar insisted, or Islamists? As the evidence leant towards the second, voters who had been ready to vote for the PP shifted. Prosecutors and police are now convinced that only radical Muslims were involved. Seven blew themselves up in a mass suicide three weeks later, as they were about to be arrested. But senior PP figures have openly fanned conspiracy theories that still try to establish some link between the Islamists and ETA.The noise over the March 2004 bombings drowns out the PP's more centrist message. Strategists want hard-core voters to stay loyal; they fret that a new far-right party may emerge. The warm and witty Mr Rajoy ought to be the perfect antidote to any nasty image. But he has failed to stamp his personality on the party. “He is too polite, too much of a gentleman,” complains an observer. Mr Aznar's shadow lingers on as well.Polls put the Socialists ahead, though their lead varies (some say it is only 1.4 points). The head of Madrid's regional government, Esperanza Aguirre, and Madrid's mayor, Alberto Ruiz-Gallardón, may increase their majorities in regional elections next year. But they are the PP's bickerers-in-chief. As Mr Rajoy said of a new book in which Ms Aguirre lays into Mr Ruiz-Gallardón: “What a troop!” Where, one might ask, is the general?
Publicado por Prometeo en 12:18 p. m.